India is a land of festivals and fairs, virtually celebrating each day of the year! Each festival pertains to different occasions, some welcome the seasons of the year, the harvest, the rains, the full moon, others celebrate religious occasions, the birthdays of divine beings and saints, or the advent of the New Year. A number of these festivals are common to most parts of India. However, they may be called by different names in various parts of the country or may be celebrated in a different fashion.

11. Dussehra (Sep-Oct): Celebrating the defeat of the demon king Ravana by Lord Rama.

14. Onam (Aug-Sep): Celebrated throughout southern state of Kerala for the harvest season.

Indian classical music can be roughly categorized into two: the northern Hindustani and southern Carnatic music, both continue to survive through oral tradition being passed on by teachers to disciples. In modern India, music from Indian films became world popular.

Dance in India has an unbroken tradition of over 2,000 years. Its themes are derived from mythology, legends and classical literature. Classical dance forms are based on ancient dance discipline and have rigid rules of presentation. Important among them are total 7 kinds:

Folk and tribal dances are of numerous patterns such as Bhangra, Kalarippayattu etc. Bhangra dance from northern Indian state of Punjab celebrates the harvest. Bhangra folk dance is fun and funky. It’s lively rhythm can be heard in many Bollywood songs and Bhangra music is remixed in different styles worldwide. Kalarippayattu is the mother of all the martial art forms in the world. It originated in southern Indian state of Kerala. It is an intricate blend of physical prowess, mindset, martial techniques and indigenous medical system. 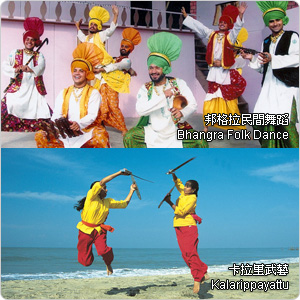 Theatre in India is as old as her music and dance. Classical theatre survives only in some places. Folk theatre can be seen in its regional variants practically in every region. There are also professional theatres, mainly city-oriented. Besides, India has a rich tradition of puppet theatre including prevalent formed puppets, rod puppets, glove puppets and leather puppets in states such as Kerala, Tamil Nadu, Orissa etc.